How to View PowerPoint Presentations on LG Optimus Vu

LG has confirmed that its large Optimus Vu smartphone “phablet” will be available in the US during the third quarter and Verizon will be its new home. A phablet is a device that can be used both as smartphone and tablet. The original Samsung Galaxy Note is such a phablet and made great success. LG Optimus Vu is a 5-inch device with 4:3 aspect ratio, the HD-IPS touch screen has 768×1024 pixels resolution. It shares some popular Android features like the dual-core 1.5GHz processor, 8MP camera, 32GB internal storage and 4G LTE network.

The LG Optimus Vu brings all its advantages out to you. Besides making phone calls like normal smartphone, the large size makes it much better to watch movies, play games and view documents. This guide is written to show you how to view PowerPoint files on LG Optimus Vu with animations and transitions using Leawo PowerPoint to Video Converter.

Free download and install Leawo PowerPoint to Video Converter on your computer. Run the program and click “Add” to import PowerPoint documents. PowerPoint formats such as .ppt, .pps, .pot, .pptx, .ppsx, .potx, .potm are supported for converting to video and playing on LG Optimus Vu. 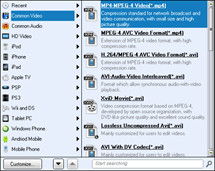 Click “Profile” and choose a LG Optimus Vu supported video format, like MP4.
There are dozens of video profiles customized for different end devices like iPad, iPhone, for easier conversion. You can create your own video profile for LG Optimus Vu too. 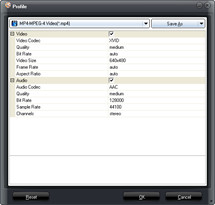 Click “Settings” and you can adjust the video profile as you want, including codec, bit rate, frame rate, aspect ratio, channel, etc. Then click “Save As” and save your settings as a new profile named “LG Optimus Vu” for example.

After the audio and video settings, you can choose to press “Customize” button to personalize a few additional settings, like set transition timings, add background music and customize your own watermark, etc.

If all the settings are done, press “Start” button to convert PowerPoint to LG Optimus Vu video format. During the conversion process, you can preview the output video in real time.

I like the 5-inch phablet idea, Samsung Galaxy Note or LG Optimus Vu, because it is the exact size that can be put in the pocket. Have fun with your PowerPoint presentations on LG Optimus Vu!