How to View PowerPoint on HTC Radar?

As the leader in Android Smartphone market, HTC now release its Windows Mango Smartphones too. As one of its consecutive strategies, HTC releases all kinds of Smartphones with different design, function and hardware. Compare to the high-end Mango Phone HTC Titan, this HTC Radar has poorer hardware, but it is more affordable and runs much longer with the almost same 1520mAh battery.

Free download and install Leawo PowerPoint to Video Converter at https://www.leawo.com/powerpoint-video-converter/ and follow the brief tutorial below to convert PowerPoint to HTC Radar. 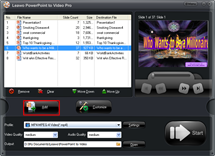 Run the program and click Add to import PowerPoint files. The converter supports PowerPoint 2003/2007/2010 and is compatible with Win 7. One of its outstanding features is batch conversion with no number limit, which will save you a lot of time. 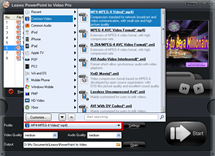 Click on the Profile box and from the drop-down list choose an output video format for HTC Radar. Then specify an Output folder for the exported videos. 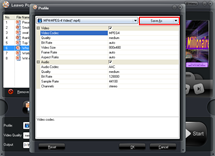 Click Settings to access the advanced video parameters to adjust like video/audio codec, quality, bit rate, video size (resolution) and frame rate, too. You can then save the changes as a new profile, under the name HTC Radar MP4 video for example, for future use. 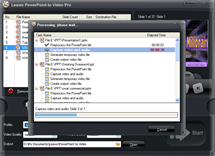 When all the settings are done, hit the Start button to start conversion.

Finally, transfer the output videos to your HTC Radar and enjoy PowerPoint on HTC Radar with with the original animations, transitions, music and video clips.

Convert PowerPoint to HTC Radar video easily so you can enjoy PowerPoint slideshow on HTC Radar and other portable devices freely.