How to Make Your Own Titanic 3D?

The most popular 3D movie currently should go to Titanic which is available in 1997 in a 2D version. It has become the hottest topic within movie lovers’ leisure time. The life-like three-dimensional effect drives people to the cinema to review the great artwork. But what if you cannot take time to the theater or put off by the expensive ticket fee? Don’t worry about it. You are about to embark on a voyage on the Titanic 3D with the help of our ingenious 3D movie maker—Leawo Video Converter, a tool allows you to solve problem about how to convert 2D Titanic to 3D. And perhaps you have the demand to enjoy other movies with 3D effect, this smart tool will settle all your hassles on how to make your own 3D movies.

Here is a brief introduction of Leawo Video Converter: it is a full-featured program that supports all video and audio conversions, with rich video editing effects. While referring to Titanic 2D to 3D conversion, this software provides you with multiple 3D setting modes for options: Red/Cyan, Red/Green, Red/Blue, Blue/Yellow, Interleaved, and Side by Side, you can choose one of them to convert 2D to 3D movie according to the 3D glasses you are using.

Take a look at the following guide on how to convert 2D Titanic to 3D version. By the way, if you are a Mac user, you can turn to Leawo null to easily master how to make your own 3D movies.

To Titanic 2D to 3D conversion, you need to import movie video to the software at first. Directly drag videos to software interface or add video via "Add Video" icon are both permitted. Then you can have a preview of the video with the built-in video player.

If your original movie video format is not compatible with the device you are going to enjoy 3D Titanic, you have to choose a corresponding format in "Profile" panel. Detailed video and audio parameters can be set within "Settings" button.

Click on the “3D Settings” icon and head to the existed panel, select a 3D setting mode and modulate 3D depth effect.
For more options, you can set more video effects in “Edit” panel: Trim, Crop, Effect and Watermark.

Click on the big "Convert" button and soon you will get a 3D version Titanic for ultimate appreciation. 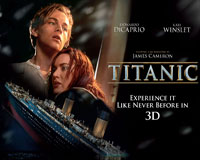 Titanic is a 1997 American epic romantic disaster film directed, written, co-produced, and co-edited by James Cameron. A fictionalized account of the sinking of the RMS Titanic, it stars Leonardo DiCaprio and Kate Winslet as members of different social classes who fall in love aboard the ship during its ill-fated maiden voyage. A 3D version of the film was re-released in theaters (often billed as Titanic 3D) on April 4, 2012, to commemorate the centenary of the tragedy.