How to Convert Videos to Nokia Lumia 920 for Freely Playback?

The Nokia Lumia 920 is technically one of the most exciting phones available right now with excellent Microsoft Windows Phone 8 operating system. The latest flagship device from Nokia brings a significant upgrade to the related Lumia line. With a 4.5 ” 1280 x 768 IPS LCD display, Windows Phone 8 OS and LTE along with several unique features such as wireless charging and Nokia’s PureView imaging.

A colored unibody polycarbonate shell makes you comfortably holding on hand, and a glove-friendly 4.5-inch screen, wireless charging, cached music, long battery life and turn-by-turn directions take the Lumia 920 a step further than Windows Phone can achieve on its own, bringing you the roundest, fullest Windows Phone multimedia experience that money can buy.

If you want to play videos on Lumia 920, most likely you need to turn to a third-party app called Lumia 920 Video Converter for help. In line with Lumia 920′ official announcement, it supports to play videos in MP4, WMV, 3GP, H.264, MPEG-4, etc. formats. So you must convert videos for Lumia 920 so that these videos will be enjoyed smoothly without any problems. To avoid you making a lengthy detour through searching on the internet, here I highly recommend Leawo Video Converter which can function as a top-ranking Lumia 920 Video Converter. If you curious about how to convert videos to Lumia 920, just check the below operations. For Mac users, Leawonull can do the best job!

You need to download, install and run this Lumia 920 Video Converter on your computer. Then, just click "Add Video" button to do the source video importation. If needed, you can double click the video title to have a preview of the video in the right built-in player.

The official announcement suggests that this Lumia 920 mainly supports MP4, WMV, 3GP, H.264, MPEG-4 formats, so you can click the Profile” frame to choose one of them like MP4 format for this Smartphone. You can also do some specific parameter settings by clicking the "setting" button besides "Profile". The advanced settings panel displays settings related to video codec, audio codec and many other options.

Customize your output video for Lumia 920

In order to have a better visual effect, you can do some editing work under the "Trim", ‘Effect", "Crop" and "Watermark" icons behind the "Edit". You can trim a new video length, crop a proper video screen size, change and improve video visual effect via regulating brightness, contrast, saturation and volume zoom.

Start to convert videos for Lumia 920

Click the Convert button to begin the conversion. And you can also choose whether to open the output folder or shut down computer after conversion.

After converting video files to Lumia 920, it is your turn to freely transfer the converted videos to the fresh-new Lumia 920 for wonderful enjoyment. 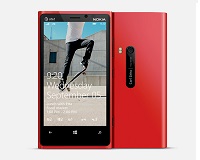 Nokia Lumia 920 is a smartphone developed and marketed by Nokia, running the Windows Phone 8 operating system. It was announced on September 5, 2012, and was first released on November 2, 2012. It has a 1.5 GHz dual-core Qualcomm Krait CPU and a 4.5 inches 1280 x 768 IPS LCD display, features an 8.7 megapixel PureView camera with optical image stabilization for still images and videos and a 1.2MP front-facing camera, comes with 2000 mAh battery, 4G LET, 32 GB internal storage, but has no card slot hence cannot be expanded with memory cards. It featured a price tag of just $99.99 on release day.