How to Convert 2D The Hobbit: An Unexpected Journey to 3D Movies with Leawo HD Video Converter?

The hottest film The Hobbit: An Unexpected Journey is really an excellent masterwork which has achieved the highest box office since its theatrical release in 2012. It tells the story of a younger and more reluctant Hobbit, Bilbo Baggins, sets out on an “unexpected journey” to the Lonely Mountain with a spirited group of Dwarves to reclaim their stolen mountain home from a dragon named Smaug. If you have seen the fantastic 3D The Hobbit: An Unexpected Journey movie on IMAX cinema and have experienced the marvelous 3D effect must be deeply attracted by the 3D edition.

Now want to bring the fantasy 3D setting of Middle Earth into your living room this Tuesday? Want to create a horrific “you-are-there” feel? Oh, yes, with the breakthrough in 3D technology, 3D home theater enjoyment is not only limited to city cinema, people now are capable of converting 2D to 3D easily with the help of a professional 3d film converter. Leawo HD Video Converter is highly claimed to be the best 2D to 3D converter software that carries 6 ingenious 3D modes to meet your unique taste.

With user-friendly interface, multiple video editing features, advanced profile selection and detailed parameter settings, this marvelous 2D to 3D Video Converter will be your best option to convert 2D The Hobbit: An Unexpected Journey to 3D vivid version. However how to convert 2D to 3D? There will be guide for you to fulfill 2D to 3D movie conversion by means of this all-around 2d to 3d converter software. For Mac users, nullwill help you a lot:

After downloading this 3D film converter, turn to "Add Video" icon to import 2D videos to this 3D video converter software. Batch importation is supported so you can load a video folder to this program at a time. You can also change the video title and video processing order, take video preview and video screenshot, set video and audio parameters, merge all files into one file, and apply all settings to all video files etc.

This 3D film converter provides you with the function to set 3D video details. Check you 3D glasses type and choose the corresponding 3D setting modes from Red/Cyan, Blue/Yellow, Interleaved, Side by Side. Insert an exact value into the 3D Depth box or drag the sliders to set specific 3D Depth effect.

Go back to the main interface and go to "Profile" item and you can pick up one video format as the output 3D video format. Different 3D players are compatible with different video file format, so you have to make sure which video file format is recognized by your 3D device.

Start to convert 2D to 3D

After all the above steps have been done, you can just click on the big Convert button on the main interface to start to convert 2D The Hobbit: An Unexpected Journey to 3D movies. This 2D to 3D converter software will help you to get this job done in few minutes so that you can enjoy any 3D movies on the go. 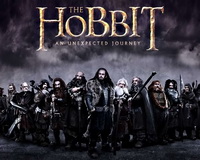 The Hobbit: An Unexpected Journey is a 2012 epic fantasy adventure film, the first of a three-part film adaptation of the 1937 novel The Hobbit by J. R. R. Tolkien, to be followed by The Desolation of Smaug and There and Back Again. An Unexpected Journey tells the tale of the hobbit Bilbo Baggins (Martin Freeman), who is convinced by the wizard Gandalf (Ian McKellen) to accompany thirteen dwarves led by Thorin Oakenshield (Richard Armitage) on a quest across Middle-earth to reclaim the Lonely Mountain from Smaug the dragon.