How to Convert FLV/F4V to the New iPad 3?

Click the “Add Video” icon and then browse the video files on your computer, select any wanted FLV/F4V video files and then load them to this software. This program allows you to import file one by one or import the whole video file folder at a time.

Here comes to the last step. You just need to click the “Convert” button and the software will convert the source FLV/F4V files to your new iPad 3 quickly. And then you feel no limit to transfer FLV/F4V to new iPad 3 and play FLV/F4V on new iPad 3. 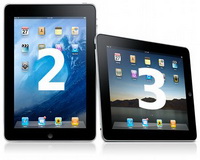