How to Convert F4V to TS?

Get your required F4V to TS Converter via the link below and begin F4V to TS conversion process. 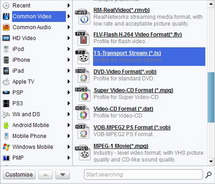 Go to the Profile button and select TS in the profile panel as output for video conversion. It you want the video with more customized features, you can also go to the Settings button to set video and audio parameters.

There are two ways prepared for you to add special features to the program. The first one is to go to the Edit panel, you can apply video editing features through trimming, cropping, effecting and watermarking. The second one is to head to 3D Settings panel and convert 2D F4V to 3D TS video.

Click on the big Convert button and start F4V to TS conversion directly.