Open Profile box to set output format for target device, like iPad 4 or others. You can choose MP4 from Common Video group, for example.

At last, hit the bottom right convert button to start converting PSY – Gentleman video. The converting would start in no time. After the conversion, you can transfer the converted videos to iPad 4 or other devices. 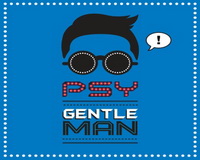 "Gentleman" is the 19th K-pop single by South Korean musician Psy released on April 12, 2013 (KST). It is the follow-up to his international hit single "Gangnam Style", which at the time of "Gentleman"’s release had been viewed on YouTube over 1.5 billion times. The first public performance of the song, with its associated dance, was unveiled at 6:30 pm on April 13 at Seoul World Cup Stadium in Seoul. Now, the MV of PSY’s Gentleman has received more than 266 million views on YouTube in less than one month.