Wanna convert your camcorder recorded MTS videos to MP4 files for freely enjoying, sharing and editing? Okay, this article will show you the right solution to effortlessly convert MTS to MP4 files to fit your daily needs with the best MTS to MP4 converter.

Yes indeed, camcorder has already become a part of our life, which helps us perfectly keep those beautiful, touching moments no matter from the trip, birthday party, family gathering or even the wedding ceremony in vivid videos. Having said that, camcorder also brings many headaches, and the most frustrating thing is that camcorders from some famous brands like Sony, Canon, Panasonic keep recorded videos in MTS format – the format that is not supported by many media players, video editors, video sharing site, etc.

Transfer all MTS videos you want to convert from your camcorder to computer hard drive. Then enter into the main interface of Leawo MTS to MP4 converter. You could directly drag and drop your recorded MTS videos to this MTS to MP4 video converter, or simple click " Add Video " button to import MTS files to program for processing.

You could import and convert several media files at a time to greatly save the time. You could also add external subtitles to your MTS videos by clicking " Add Subtitles " button on the "ABC" box below program left processing list. MTS video preview is also available with built-in player.

Choose MP4 as the output

Get into the " Profile " box, you can see a lot of video and audio formats that are compatible with various devices, players and software. Here just set the output format like this: Common Video >MP4-MPEG-4 Video(*.mp4).

Open "Edit" panel, and you can trim and crop video to remain the wanted part, adjust video brightness, contrast, and saturation and apply image/text as watermark for video. Go to "3D Settings" panel, you can choose to convert 2D MTS to 3D MP4 video.

When all settings have been done, click on the bottom-right big button "Convert" to complete the MTS to MP4 conversion. After converting MTS to MP4, you could freely enjoy those converted MTS videos on any devices and media players, or edit and share them without any limitations.

If you are the one now hunting for the best media player to play those recorded MTS videos directly, Leawo Blu-ray player could do you a big favor. 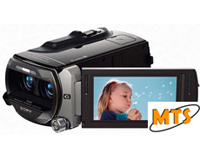 MTS is a file extension for an AVCHD (Advanced Video Coding High Definition) video clip format for high-definition video. The MTS file format supports 1080i and 720p in a relatively small file size. AVCHD video files can be burned to Blu-ray discs and played in compatible devices. AVCHD files are based on the MPEG 4 codec. Sony and some Panasonic video cameras have software to open and edit MTS files. Other programs like Leawo Blu-ray Player, Flash CS5 and various Cyberlink players could open even play MTS files directly.