Once activate the program you will get into the first "Browse" panel which acts like an internet browser that allows you to add YouTube video URL to the address bar, and go to the exact video page for a view. When the video is playing, there will be a pop-up window exists at the right bottom of the first panel. You can conduct YouTube video downloading order and "Save as" a folder on your PC.

Click on the "Video" button on the top of the software and you can switch to the second panel for video format conversion. The program is with a built-in video player so that you can preview the video freely. For video format conversion you have to first choose a Sony Ericsson Xperia Play compatible format (take MP4 for an example) by clicking on the "Convert" button within this panel. After picking up the corresponding format you can just start to convert.

Open the third "Convert" panel, you can have a look at the YouTube video downloading and converting status. You are also permitted to do after actions like Delete, Convert, Burn(Leawo Total Media Converter Ultimate will be invoked), Play( play with your default system media player) and Open for the downloaded videos.

Connect your Sony Ericsson Xperia Play with your computer and you can save those wanted downloaded and converted videos to your cell phone for enjoyment. 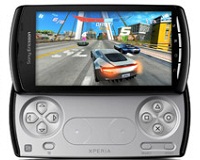 Sony Ericsson Xperia Play is a handheld game console smartphone produced by Sony Ericsson. It is the first device to be included in the PlayStation Gertified program with notes that it can play PlayStation Suite games. Running on Android 2.3 Gingerbread, it is equipped with 1GHz CPU, Adreno 205 GPU and a 4-inch display (854 x 480), so it performs excellently in video playing. With YouTube to Sony Ericsson Xperia Play Video Converter, users can fulfill the requirements about online YouTube videos downloading to it and YouTube videos appreciating on it.