After you have installed and run this powerful Samsung Galaxy S YouTube Converter, you will see the “Browse” panel at first. Insert the YouTube video URL to the URL filed and directly go to the video for a viewing. The download message will pop up at the right bottom, you can choose “Save as”to choose an output folder for the downloaded video.

Got to “Video” panel where you can have a preview of the downloaded video in the built-in FLV player. You can also get video detailed information in this panel. Click on “Convert” button then you can choose to convert the downloaded YouTube video to the Samsung Galaxy S compatible format. For only audio only, you can just extract music from YouTube to Samsung Galaxy S.

To get downloading and converting condition, you can click on the “Convert” button on the top and turn to the following panel. 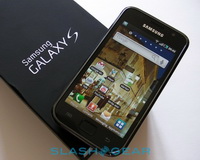