At present, the film industry maintains a strong momentum, many excellent movies are produced. Among them, The Breaking Dawn can be claimed as one of the most popular romantic fantasy films. It was divided into two parts. The part 1 was released in theatres on November 18, 2011, and its DVD and Blu-ray Disc was available on February 11, 2012 in the United States. The film grossed over $705 million worldwide. It ranks as the 4th highest-grossing film of 2011 worldwide, even now the film is also currently the 50th highest-grossing film of all time.

It is a romantic fantasy movie which tells us the love story among people, vampire and werewolves. I have viewed the film on my smart phone because I have no spare time to enjoy it in the cinema and I think it is really deserves to watch.

Usually, you cannot find video resources of the popular film on the Internet right after its releasing in the cinema. I got the video from one of my friends and it really took much efforts. Sometimes, I really worried about that the precious movie was probably deleted from my smartphone by my false operation. But later I found actually there was no point in worrying about that problem. Because, even the film was deleted, I could also get back it from my smartphone with a powerful data recovery app.

I think maybe some of you are interested in the method that how to retrieve deleted film of The Breaking Dawn 1 from smart phone, so next I would like to share it with you. There are several steps. Before following the guide, please first download and install Leawo Data Recovery for Mac on your macbook. Soon you will find it is a good helper. 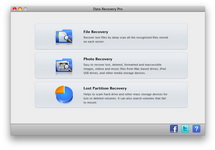 There are three modes you can choose from. They are “File Recovery”, “Photo Recovery” and “Lost Partition Recovery”. If you cannot assure what kind of file you want to recover, you’d better choose “File Recovery” which allows you to recover all the lost files by deep scan all the recognized files stored on each sector. 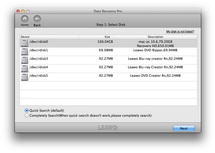 Choose “File Recovery” and select the hard drive the lost or deleted film originally saved. Click “More Options” and choose the target file types and check the option of “For Deleted Files” to scan the deleted files only. This operation will help you save your time. 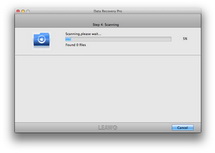 Scan the Deleted Files on Mac 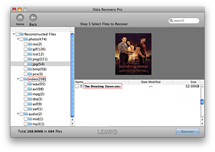 After the scanning, all the deleted files will be shown on the left side. And at the same time, you can preview them on the right side which helps you to choose the file you want to recover easily. Here you can find The Breaking Dawn 1 Video in the “Video” category, just check it and click the big “Recover” button to start recovering.