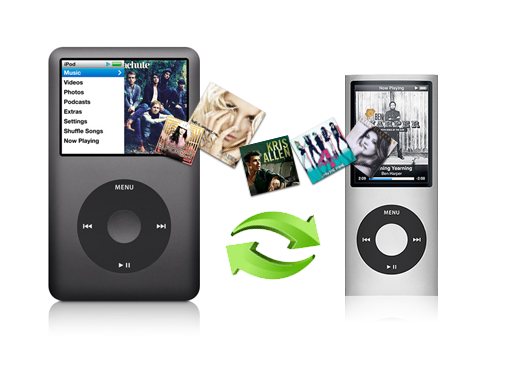 Connect iPod touch 4 to the computer using USB cable at first. When a dialog box named “Scanner and Camera Wizard” pops out, follow the instructions to back up those photos shot by iPod touch 4.

Import photos to iTunes from folder

After that, connect iPod touch 5 to the computer, open iTunes and select the icon of “iPod touch 5” under Device tab. Then choose “Photos” button in the right panel, check “Sync Photos from” box and choose “Choose folder…” option in the drop-down menu to import the transferred iPod touch 4 photos from folder.

Next, click “Store” button, choose “Authorize This Computer…” option and then enter into Apple ID into corresponding panel. After that, click “Apply” button to manage the transference of photos from iPod touch 4 to iPod touch 5.

Click “Photo” tab under the icon of iPod touch 4 to list all photos available. Then choose those photos needed to be moved from iPod touch 4 to iPod touch 5, right click them and select “iPod touch 5” option in the drop-down menu of “Transfer to”.