Click "Add Video" button to load source F4V video clips to Leawo F4V to DVD converter for burning, or directly drag the video clips in and drop on the interface. 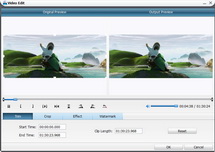 Click the big "Burn to DVD" button to enter the DVD menu interface to DIY disc menu and templates.

In the settings interface to do more related settings to convert F4V files to DVD with this F4V to DVD Converter by clicking Next button.

Click the Start button to to convert F4V to DVD within Leawo F4V to DVD Creator.

Convert and burn all popular videos to DVD with free yet gorgeous DVD menus.
$29.95

Go to DVD Creator for Mac