In an era that tablets and smartphones are in all shapes and sizes, plus become ever-cheaper and more popular, what room is there for a device like the iPod touch? The answer is that iPod touch is not just an iPod touch anymore. It has become a phoneless iPhone and an iPad that fits in your pocket!

The outstanding design and overall performance of the 2012 fifth-generation iPod Touch put it miles ahead of previous model. It boosts the same crisp and longer 4-inch Retain Display as iPhone 5, a faster processor, a much improved front-facing HD camera, iOS 6 and even a feather-like design, which re-sparks our enthusiasm for this eye-catching music player.

Thanks to its high resolution screen as well as ultra-fast processor, enjoying DVD movies on iPod touch is a quite pleasure thing, without any delays and lags. However, due to the missing of DVD drive on iPod touch, DVD buffs have to resort to an all-powerful tool called Leawo DVD to iPod Touch converter if eager to play DVDs on iPod touch. By using this app, it is just a snap to convert DVD to iPod touch friendly video and put DVDs to iPod touch for freely playback. To avoid you making a detour while doing the DVD to iPod touch conversion, a step-by-step guide is provided to help you along. Check out!

Download, install and run this DVD to iPod touch ripper on your computer. Then, click "Load DVD" button to import the DVD sources you want to rip. You can preview the DVD files with built-in player and select desired subtitles, audio tracks for output.

To play DVDs on iPod touch successfully, it is of necessity to pick up an iPod touch friendly video format as the output from program "Profile" box, say MP4.

Here comes the final step. You can click bottom-right button "Convert" to get the DVD to iPod touch conversion started. The full conversion will be finished in a short while.

For those iTunes haters who are hunting for a more convenient and easy way to transfer DVD movies to iPod touch, a CNET award-winning app iTransfer could do you a big favor! 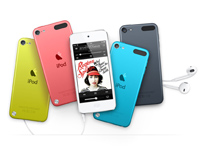 The 2012 fifth-generation iPod Touch is the best iPod ever and as close to a phoneless iPhone 5 you can get. It takes the best features of the new iPhone 5 like the taller 4-inch Retina Display and lighting connector. Compared to the previous version, the new iPod touch is also faster thanks to an A5 chip and gains much improved 1080p front and 5MP rear cameras, support for Siri and is now available in a variety of back colors. Its $299 starting price will be a turn off for some users, but it’s still the cheapest way to get the full iOS 6 experience in your pocket.