This article is going to show an effective solution on how to convert and rip DVD to Lumia 928. If you are a Lumia 928 user and want to watch DVD movies on Lumia 928 while on the go, this guide is indeed what you need.

Nokia has officially lifted the curtains on its latest Windows Phone 8 flagship – Lumia 928. Boasting a feature-packed 8.7-megapixel Pureview camera with Carl Zeiss optics, a 4.5-inch OLED screen with 1280×768 resolution, 4G LTE connectivity, 1.5GHz dual-core Qualcomm processor, 1GB of RAM, 32GB of internal memory and 2,000mAh battery, Lumia 928 is shaping up to be one of the best Windows Phone 8 mobile on the market and the nearest rival to Samsung Galaxy S4.

Download, install and run this DVD to Lumia 928 converter on your computer firstly. Then, click " Load DVD " button to import DVD movies or directly drag and drop DVD movies to program list for processing.

You can choose preferred subtitles for output by opening the subtitle drop-down box on the bottom of the left processing list.

Head to program " Profile " box to pick up a Lumia 928 friendly video format as the output. Based on the official specs, Lumia 928 recognizes videos in MP4, ASF, WMV, AVI, 3GP, 3G2, M4V, MOV formats well. So you can choose one of them as the output profile.

For Lumia 920 users, you could turn to this guide to know how to play DVD movies on Lumia 920. 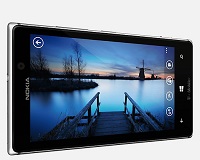 Lumia 928 is Nokia’s latest flagship exclusively available to Verizon. This Windows Phone 8 handset is slimmed down compared to its predecessor Lumia 920 and has come spec bumps. It has a 1.5GHz dual-core Snapdragon S4 processor, 1GB of RAM, 2,000mAh battery, integrated wireless charging, NFC, 1.2-megapixel front-facing, 8.7-megapixel PureView rear camera with Carl Zeiss optics and 32GB of storage with no SD card slot. The display is a 4.5-inch PureMotion HD+ OLED WXGA HD display with a 1280×768 resolution. The Lumia 928 will go on sale on May 16, 2013 at a very competitive $99 on-contract price.