2 Methods to Transfer Photos from iPad 4 to Computer

As another market hit coming along with long-rumored iPad mini, iPad 4, officially known as iPad with Retina Display, has turned out to be the new flagship of Apple tablet. Compared with The new iPad 3, iPad 4 not only updated its processor from dual-core A5 to dual-core A6, replaced traditional 30-pin connector with Lighting but also sported an improved Retina Display owning a resolution of 2048-by-1536 pixel. With 5-megapixel rear camera, iPad 4 is capable of bringing users extraordinary entertaining experience on photographing. Therefore, the transference of photos from iPad 4 to computer seems to be quite necessary sometimes.

Method One: Import photos with iPhoto

Designed as a professional photo editor on Mac, iPhoto provides users various editing features to make their photos attractive and sexy. Besides that, iPhoto can also be employed to manage photo transference from iPad 4 to computer. Users just need to import those photos on iPad 4 into iPhoto, edit the photos and then export them from iPhoto to a computer folder. Moreover, after the importing photos from iPad 4 into iPhotos, users are allowed to choose whether delete those imported photos on iPad 4 or not.

Download and launch the latest version of iPhoto to make sure it can read iOS 6 devices like iPad 4. Then connect iPad 4 with computer via USB cable. 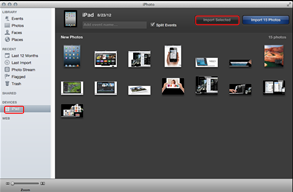 Open iPhoto and then all the photos in iPad 4 will be listed. To transfer multiple photos from iPad 4 to computer, select them all with “Command” key and then click “Import Selected” button.

Export the photos to computer

After editing those iPad 4 photos, select all of them and them export them to a computer folder to manage photo transference from iPad 4 to computer. After that, choose either Delete Photos or Keep Photos on iPad 4.

Download and launch the latest version of iTransfer and iTunes to make sure iOS 6 devices like iPad 4 will be supported. Then connect iPad 4 with computer via USB cable.

Open Leawo iTransfer, click Photos tab to list all the iPad 4 photos available in the right section. Then choose those photos one desire to transfer from iPad 4 to computer, right click the mouse and go for “My Computer” option in the drop-down menu of “Transfer to“.

After choosing the output file location with “Save to folder” bar, click “Transfer Now” button to begin the photo transference from iPad 4 to computer.