How to Transfer Photos from iPad to computer?

"I had just bought a new iPad and leave my PC to my friend. Recently I had captured some great photos with my iPad and I want to share them with my friend. I find that it is forbidden for me to get the photos off my iPad and transfer to other computers directly. There is a demand for me to transfer photos from iPad to computer and how can I fulfill that?"

Before you get this iPad Transfer started on your computer, iPad to computer connection is needed. Then you will notice that your iPad and your computer file information will be shown on this software. You can just tab on each file type and get details.

Open "Photo" or "Camera" option under iPad, you will get iPad picture files. Then you are offered with three ways to select iPad photos for transferring: the first one is that you can use the AutoFilter function to distinguish those files that are not on your computer but on your iPad, so that you can avoid transferring the same photos to computer; the second one is that you are allowed to refer to the Show as list & Show as cover file display modes, and then select photo files according to their property; the third one is that you are permitted to resort to the Manual Filter function to search for the wanted picture files through keywords.

Transfer Pictures from iPad to Computer 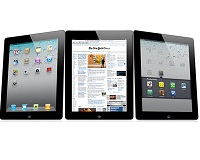 iPad is a line of tablet computers designed, developed and marketed by Apple Inc. primarily as a platform for audio-visual media including books, periodicals, movies, music, games, and web content. The iPad runs the same operating system as the iPod Touch and iPhone with a multitouch display, and uses "Wi-Fi" connection to access local area networks and the Internet. The device is managed and synced by iTunes running on a personal computer via USB cable.