You must also meet such kind of problems if you are a fancier for HD quality playback on Blu-ray players. Currently, HD (1080P) F4V videos are everywhere online available for freely enjoyment. But if you want to make full use of these HD (1080P) F4V videos on your Blu-ray players, you will need to convert/create F4V to Blu-ray files firstly with a F4V to Blu-ray burner. 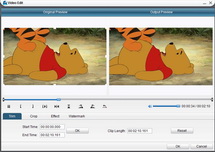 Click the big "Burn to Blu-ray" button to enter the disc menu interface to DIY disc menu and templates.

Convert and burn all popular videos to Blu-ray/DVD with free yet gorgeous disc DIY menus.
$39.95