Back in September, Nokia introduced its new Lumia 820 and 920 phones and simultaneously brought features like its PureView camera and wireless charging to its Windows Phones. But if price is what stood in between you and the Lumias, I should tell you that Nokia has now announced a budget Windows Phone 8 mobile – Lumia 720.

The all-new phone is with a range of high-end specs including the 4.3-inch 800-by-480p screen and the 1GHz dual-core processor, making it the best media player for us to watch DVD movies while on the go. Its top-notch screen delivers sharp video image and its top-end processor guarantees smooth video loading and playback when streaming HD DVD movies. So anyone eager to watch DVD movies on a more affordable Windows Phone 8 smartphone, the Lumia 720 is a solid choice.

Mac users, Leawo DVD to Lumia 720 Converter for Mac could help you along.

Download, install and run this DVD converter for Lumia 720 on your computer firstly. Then, click "Load DVD" button to import DVD movies or directly drag and drop DVD movies to program list.

Get access to program "Profile" box to pick up a Lumia 720 friendly video format as the output. Based on official specs, Lumia 720 recognizes videos in MP4, ASF, WMV, AVI, 3GP, 3G2, M4V, MOV formats well. So, you can choose any one of them as the output profile.

Now get the DVD to Lumia 720 conversion started by clicking the bottom-right button "Convert". After converting DVD to Lumia 720 video, it is the time for you to transfer DVD movies to Lumia 720 for freely playback. Just immerse yourself into those wonderful movies. 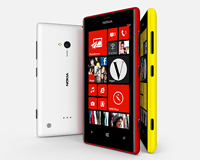 Lumia 720 is a mid-range Windows Phone 8 mobile crafted by Nokia. This phone features a 4.3-inch 800-by-480p screen and is powered by a 1GHz dual-core Snapdragon processor. It only carries 512MB of RAM and 8GB of built-in storage (expandable with micro-SD cards up to 64GB). There is also a 6.7-megapixel rear camera that incorporates some of Nokia’s advanced camera technology, as well as a 1.3 MP front shooter. Like Nokia’s other handset, the Lumia 720 is available in 5 colors: Yellow, red, cyan, white and black. It will debut in March and cost about $ 330 with a two-year contract.