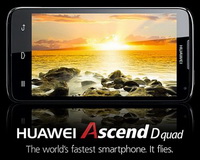 Huawei Ascend D quad is powered by Huawei’s own ARM-based chipsets, called K3V2 with four cores humming along at 1.5GHz and a 4.5" HD LCD display with 720×1280 pixels of resolution and "the industry’s most powerful 32-bit true color graphic processor". Not only that, but it seems to be the most compact 4.5-incher with 8.9mm slimness, and Huawei has also addressed the complaints about its camera sensors, including an 8MP BSI one here, along with the 1.3MP front-facer.