Leawo Free YouTube Downloader is just what you are looking for. It supports to download Fast Five high quality from YouTube easy and fast, and then convert the movie video to compatible format for playback on various portable devices. Or if you are using Mac OS, take Leawo YouTube Downloader for Mac to download HD Fast and Furious 5.

You may able to download rented Fast Five from YouTube with many other programs, but few of them have the function to convert the downloaded movie videos at the same time. And Leawo Free YouTube Downloader can successfully for you. Click on the “Video” button and go to the following section. You are allowed to have a preview of the movie with the embedded player. Click on the “Convert” button, and you can choose many video formats for conversion. Confirm the video converting process after selection.

When you have positioned the needed Fast Five movie video, download HD Fast and Furious 5 video and convert it to different formats for your preference. You can get to the movie video downloading and converting status within the "Convert" section. 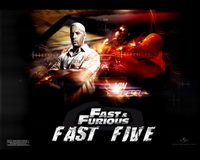 Fast Five which also known as Fast & Furious 5 or Fast & Furious 5: Rio Heist, is an action film written by Chris Morgan and directed by Justin Lin. As the fifth installment in Fast and the Furious film series, it stirs the movie market again. It was released first in Australia on April 20, 2011, and then in the United States on April 29, 2011. Fast Five follows Dominic Toretto (Vin Diesel), Brian O’Conner (Paul Walker) and Mia Toretto (Jordana Brewster) as they plan a heist to steal $100 million from corrupt businessman Hernan Reyes (Joaquim de Almeida) while being pursued for arrest by U.S. Diplomatic Security Service (DSS) agent Luke Hobbs (Dwayne Johnson).