Once you have installed the program in your PC you can see the first "Browse" panel as below. Add a YouTube video URL to the address bar and go to the video page. Then you will see a window pop up at the right bottom, click on "Save as" button to choose an output format and activate the video downloading order.

Open the second "Video" panel, you can preview the video with the built-in video player. Video detailed information is also allowed to be viewed in this panel. To get the exact video format that is compatible with HTC Thunderbolt, click on the "Convert" button on this panel. In the pop-up window you pick up the corresponding format and you are able to do output video and audio settings as well.

Open the third "Convert" panel, you can get the video downloading and converting status and carry out some after-done actions as showed in the below.

Open the output video folder and choose the converted videos to transfer them to your HTC Thunderbolt for extensive viewing. 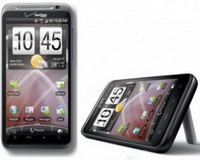 HTC Thunderbolt is the first 4G LTE smartphone on the Verizon Wireless network and it is a  CDMA/LTE variant of the HTC Desire HD. The ThunderBolt has a 1GHz Snapdragon processor manufactured by Qualcomm, and runs on Verizon’s 4G LTE Network. It runs Android 2.2 Froyo, with the custom HTC Sense 2.0 skin as the user interface. It has a 4.3-inch class (480×800) WVGA TFT capacitive touchscreen covered by Gorilla Glass, a special crack and scratch resistant material made by Corning. With YouTube to HTC Thunderbolt Video Converter, you can enjoy any videos and audios from YouTube on your HTC Thunderbolt.