VLC media player (also known as VLC) is a highly portable free and open-source media player and streaming media server written by the VideoLAN project. VLC media player supports many audio and video compression methods and file formats, including DVD-video, video CD and streaming protocols. It is able to stream over computer network and to transcode multimedia files. It is a cross-platform media player, with versions for Microsoft Windows, Mac OS X, GNU/Linux, BeOS, MorphOS, BSD, Solaris, iOS, and eComStation. However, even though VLC player is free and comes with various features, you may look for a VLC alternative due to problems such as the annoying "Rebuilding Font Cache" thing and unfriendly UI. Here, in this tutorial, I would like to list some wonderful VLC player alternative programs that might be better than VLC player for you. You can get the best VLC alternative here.

Leawo Blu-ray Player is the best alternative to VLC media player that lets you enjoy not only common/HD movies and audios in various formats on your computer, but also Blu-ray movies and DVD movies in disc or folder. It combines all the goodies of GOM Player and KMplayer to play back videos and audios in various formats on Windows like videos in AVI, MPEG, WMV, MP4, FLV, RM, MOV, Xvid, 3GP, HD MP4, HD AVI, HD MOV, HD TS, HD TRP, HD VOB, HD MPG, HD WMV, HD ASF, etc., and audios in AAC, AC3, MP3, M4A, MKA, WAV, WMA, etc. What should be mentioned here is that, Leawo Blu-ray Player is a totally free DVD and video player software program to let you play back videos, audios and DVD movies without any cost. It is compatible to all Windows OS computers, including Windows XP/7/8. It delivers lossless quality video and audio, with subtitles, audio tracks, video effects and audio effects adjustable. 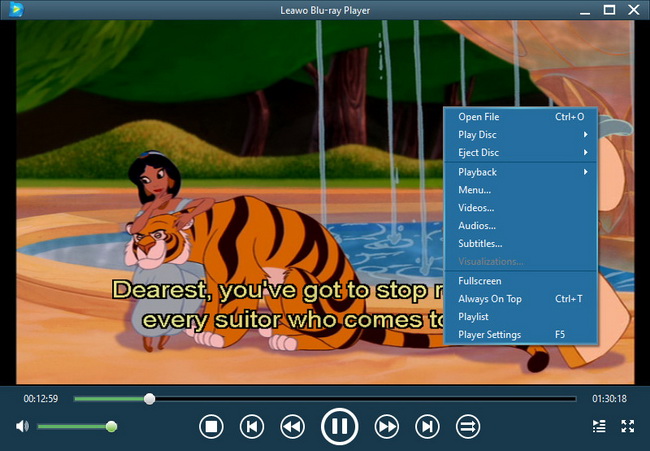 A specs summary of Leawo Blu-ray Player:
Useful Blu-ray player to play back Blu-ray discs and folders without quality loss;
Play back all the latest Blu-ray and DVD discs without quality loss, just like hardware Blu-ray players;
Free media player to play back DVD, video (up to 1080P included) and audio in all formats on Windows;
Allow people to adjust subtitles and audio tracks, and load external subtitles for better movie experience at will;
Support to play back audio files with DTS-HD Master audio and DTS-5.1 audio;
Full menu for playback control to enjoy audio, video, DVD and Blu-ray friendlier;
100% compatible with Windows 8 OS supported.

Just because the Windows Media Player application comes pre-loaded with Microsoft’s desktop OS, doesn’t mean it’s completely incapable of playing popular media formats. Well, it does need a right codec pack to get started. Instead of turning your back to this pre-loaded tool, you can simple enhance its capabilities through a few add-ons. Not only will it enable you to view content encoded in formats that are natively unsupported, but also dismisses the need for third-party tools like VLC. But since the release of Windows 8, Microsoft has abandoned the DVD disc playback support on its pre-loaded Windows Media Player. People needs to pay extra money to be able to play back DVD discs, let alone Blu-ray discs.

Amongst the many offerings in the VLC alternatives array, we have included the KMPlayer, which places itself as a practical pick for those who prefer a simple tool with many capabilities. Compatible with most popular video formats such as AVI, RM, MPEG 1/2/4, ASF, MKV, FLV, DVD, MP4, Xvid, DivX and H.264, you can even playback audio content in APE, MP3, WAV, MPC, Flac, MIDI and various other encoding. To deliver a more enriched user experience, you can carry out a number of adjustments like changing the brightness and contrast, activate the noise reduction plug-in, adjust the screen size and even stretch it to completely fill up your display. For a price tag that reads as ‘free,’ there’s absolutely no harm in giving the KMPlayer application a try.

Media Player Classic is a free utility that provides movie playback for 32-bit and 64-bit Microsoft Windows. It looks just like Windows Media Player v6.4, but has many additional features. You can use the player as a Media Player Classic Home Theater. It has built-in codecs for MPEG-2 video and codecs for LPCM, MP2, AC3 and DTS audio, and also contains an improved MPEG splitter that supports playback of VCDs and SVCDs using its VCD, SVCD, or XCD Reader. An AAC decoding filter makes MPC suitable for AAC playback in MP4.

Realplayer refers to a multimedia player made by RealNetworks that has the ability to play RealAudio and RealVideo transmissions. The technology also allowed the user to organize and create MP3 files from audio CDs. The media player is compatible with numerous formats within the multimedia realm, including MP3, MPEG-4, QuickTime, Windows Media, and multiple versions of the proprietary RealAudio and RealVideo formats. RealPlayer is also available for other operating systems (OS) and Linux, Unix, Palm OS, Windows Mobile and Symbian versions have been released. The software is powered by an underlying open source media engine called Helix.