How to Transfer Books from iPad 4 to Computer

Several days ago, Apple brought out its altogether new device iPad 4 which took everyone by surprise. Because at the Apple event we were all waiting to hear news about the iPad mini, however we were certainly not expecting to hear about the iPad 4.

The official data shows that the changes between the iPad 3 and iPad 4 fit more with a refresh. For example, the iPad 4 is equipped with the new Lightning connector that featured on the iPhone 5 and comes with an A6X processor claiming to offer double the processor and graphics performance of the A5X used in the iPad 3. There’s also a bump to a 720p FaceTime camera, dual-band WiFi 802.11 a/b/g/n and new image signal processor. However Apple is even maintaining the current prices of the iPad 3, with the same pricing structure for the iPad 4. As it stands now, it’s really good news for who have held off on getting an ipad 3, because they can now pre-order ipad 4. That sounds really compelling.

To the best of my knowledge, many people use iPad 4 as an E-reader because iPad 4 always recommend its users some popular books. It’s really favorable, especially for those who always pursuit of popularity. Without any efforts, they can reach the bestseller at any time. But, sometimes they badly need to read the books they bought on iPad 4 on their computer, what can they do?

It’s really not an easy job because iPad 4 can neither function as a USB device nor support Micro SD card. In fact, some iTransfers designed to solve this problem have appeared in the market. Among them, Leawo iTransfer is a favorable one which received much positive reviews from its numerous users. The following is a detailed tutorial about how to transfer books from iPad 4 to computer. 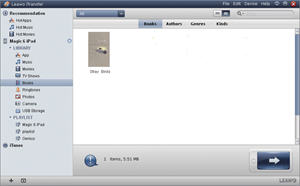 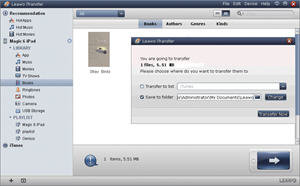 Run Leawo iTransfer and then click “Books” tab to list all the iPad 4 books in the right section. Then pick out those books you would like to transfer from iPad 4 to computer, right click the mouse and then follow the path “My Computer” >”Transfer to”. 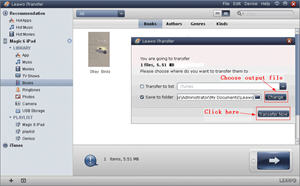 After all those operations, specify the output folder as a computer folder with “Save to folder” bar and then click “Transfer Now” to begin the books transference process from iPad 4 to computer.