How to convert DVD to BlackBerry PlayBook on Mac?

Install this DVD to PlayBook converter for Mac and open it to load DVD discs or DVD folders into this program for conversion by drag-and-drop or clicking the "load DVD" icon to import DVD files to the program. 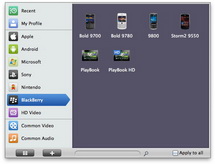 Click the icon before 3D button to choose output video format. Select one from 1080p HD Video, H.264, MPEG, DivX, and WMV, or you can directly choose from BlackBerry group.

Convert DVD to PlayBook on Mac

The BlackBerry PlayBook is a tablet computer by Research In Motion (RIM), a Canadian company that produces consumer electronics, best known for the BlackBerry smartphone. Also announced was a new operating system, the BlackBerry Tablet OS, based on QNX Neutrino, to run on the tablet. The device was released for general purchase in the United States on April 19, 2011, and early sales figures note that approximately fifty thousand (50,000) were sold on launch day, and some analysts estimate RIM to sell 500,000 units during their first fiscal quarter ending in May.