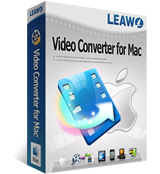 Leawo Video Converter for Mac is a professional video converting tool for Mac users to tackle with all video and audio conversions. Acted as a Mac 3GP Converter, it can easily convert all popular video formats to common and 3D 3GP and 3G2 video file on Mac, including AVI to 3GP on Mac, MP4 to 3GP on Mac, MOV to 3GP, MPEG to 3GP, etc., as well as extract audio file to save as popular format like MP3, AAC for your Mobile Phone, digital video or audio players, and 3D supported devices.

This 3GP converter for Mac provides you so many powerful features, such as merging multiple files and convert into a whole 3GP or 3G2 file, batch video to 3GP for Mac conversion, video crop, video trim, video rotation, video customize and video watermark to make you have better enjoyment of video on your cell phone and other digital players via the help of Apple Macintosh.

Convert videos to 3D 3GP and 3G2
This Mac 3GP Converter supports to convert plain 2D video in any formats to 3D 3GP or 3G2 formats for stereo video enjoyment.

Play output video on various players
The converted 3GP or 3G2 files are most supported by many Mobile phones. So you can freely to enjoy the videos on your cell phones on the go. Besides you are also able to enjoy these converted files on other media players and 3D players.

Edit video with individualized features
There are multiple video editing features designed for you: you can trim your video or audio files and convert the segment you want with this 3GP converter for Mac, crop video image size to get rid of the black border, rotate the video angle, set video brightness, contrast, saturation to perfect video effect and watermark video with image or text.

Do 3D settings for better output effect
Within this Mac 3GP Converter, you can convert the video to 3D 3GP or 3G2 as well as add some special effects to the 3D videos by 3D setting mode choosing and 3D Depth effect adjusting. The output 3D will be unique to you.

Video preview and take screenshot
With the built-in video player, you can easily have a preview of the video and take some pictures out of the video to enrich you image library or for further uses.

Merge multiple videos into one video
Merge files into one for video show. With this Mac 3GP converter, you can merge files first to output for an uninterrupted video show on your mobile phones.

Intuitive interface for easy operation
Leawo 3GP video converter for Mac has an extremely nice and clear interface, thus you can convert videos to 3GP file for Mac with just a few simple steps.